My Wife Was 'Stuck On A Truck' 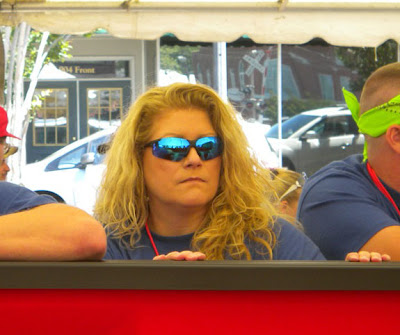 Here in Conway, Arkansas is a popular, annual spring festival called Toad Suck Daze. And one of the main events is 'Stuck On A Truck', a contest to see who can keep their hands on a Ford F-150 and claim the big prize.

This year's winner is Anna Johnson, who stayed on the truck an amazing one hundred and thirty-five hours and fifty-two minutes, shattering the previous record of ninety-nine hours.

My wife decided she wanted to participate in this year's event. The following is a summary she wrote about her 'Stuck On A Truck' experience:

Well, I didn't win anything, but I did accomplish something. If anyone ever asks me, "What's the craziest thing you've ever done?" I can tell them, "I was stuck on a truck for 62.5 hours!"

I went into the competition prepared to win. Along with my shorts and 'Stuck on a Truck' t-shirt, I wore compression socks (much to my husband's chagrin) . I bought a back brace, though I never had to use it. I had three pairs of tennis shoes, a pair of Timberland's and a pair of Crocs flip flops to rotate throughout the contest. But the most important thing I did (and the reason why I hung in there for 62.5 hours) is I snacked on low-carb, healthy foods, drank mostly water, and took lots and lots of BarleyLife.

I also had an amazing pit crew. I know I wouldn't have lasted more than 24 hours without them. They made sure I had something to eat and drink and was rested. They also sat in the bleachers and interacted with me, to keep me awake and alert.

I took my first nap at twelve midnight, Sunday morning, on one of my fifteen minute breaks. My husband told me he would wake me up two to three minutes before it was time to get back on the truck. Instead of the nap refreshing me, it unsettled me more than anything. When I got back on the truck, I was shaking from head to toe.

Then about fifteen minutes later, the bank staff informed us that due to the thunderstorm, they were moving us inside the bank for safety reasons. We then all laid down on the floor and went to sleep.

Two hours later, they woke us up and led us back to the truck. By this time, my feet were killing me. All I could think of was that I was in pain. I felt miserable. Shortly after returning, I took both hands off the truck... I was done.

My husband was there to take me home. He said I acted like I was drunk. I don't remember much about those last few moments.

'Stuck on a Truck' was a great experience, though I will never do it again. I was told by a good friend of mine, Tim Secor (previous Stuck On A Truck competitor), that competing in this contest would be the hardest thing I have ever done. He was right. It was so much harder than I could have ever imagined!

I thought I was tough and I guess I still am. But I can't be stuck on a truck long enough to win one. As I write this blog post, there at twelve people still 'Stuck on a Truck'. Almost eighty-six hours... unbelievable!"

Laura slept twelve hours after coming off the truck. She also took a few naps over the course of a few days and is now feeling back to normal.

Maybe next year, I'll get a serious brain fart and participate in the 'Stuck On A Truck' event myself! Cheers!