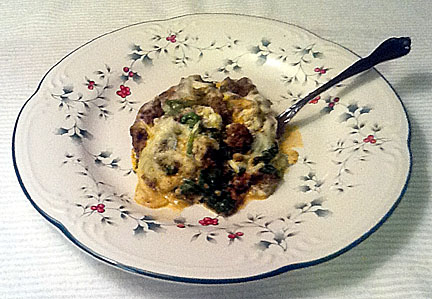 Following is an example of how you can take a favorite 'high-carb' recipe and transform it into a wonderful low-carb dish.

What my wife did is substitute spinach for the lasagna noodles. Our family loves it! So she makes this yummy dish once every other week.

Another great thing about this recipe is that it makes two 9x13 pans of lasagna. You cook once and have dinner for several nights. And trust me, no one complains about eating these leftovers!

In a large pot, brown the ground beef. Drain beef, then season meat with salt and pepper to taste.

Saute mushrooms in butter until tender. To the ground beef, add mushrooms, tomato sauce, and garlic powder. Simmer on medium-low.

Grease the two 9x13 pans with butter or non-stick spray.

Open one of the packages of baby spinach leaves and divide the spinach equally between the two 9x13 pans.

Divide the mixture evenly between the two 9x13 pans and place the green chili/cream cheese mixture on top of the meat mixture.

Open the second package of baby spinach leaves and divide the spinach equally between the two 9x13 pans, layering it on top of the green chili/cream cheese mixture.

Divide the remaining meat mixture equally between the two 9x13 pans, layering it on top of the spinach.

First, sprinkle some Parmesan cheese on top of the meat mixture in each 9x13 pan. Then top each pan of lasagna with two cups of Mozzarella cheese.

Cover with foil and bake at 375 degrees for thirty minutes. Remove the foil and if the mozzarella isn't quite melted, cook for another five minutes, uncovered.

The amount of carbs in a lasagna made with pasta is 36.5 per serving. Believe me, you won't miss the pasta.