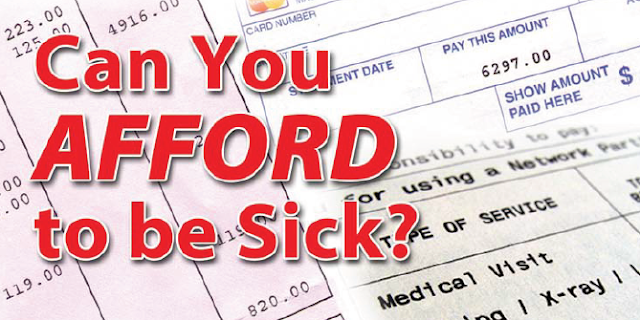 According to Reuters News Service, over half of all U.S. bankruptcies are caused by ordinary medical bills.

Most of the people sent into debt by illness are middle-class workers with health insurance.

The study, published in the journal Health Affairs, estimated medical bankruptcies affect about two million people every year, if both debtors and their dependents, including about 700,000 children, are counted.

"Our study is frightening. Unless you’re Bill Gates you’re just one serious illness away from bankruptcy," said Dr. David Himmelstein, an associate professor of medicine at Harvard Medical School, who led the study.

"Most of the medically bankrupt were average Americans who happened to get sick. Health insurance offered little protection."

A few quick facts:
In other words, you better not get sick.

According to the Archives of Internal Medicine, you can reduce your risk for sickness and disease by eighty percent, by living a healthy lifestyle.

This includes not smoking, maintaining a healthy weight, exercising regularly and eating a nutritious diet.

And when you combine a healthy lifestyle with concentrated nutrition such as BarleyLife® Xtra, the results speak for themselves.

Why not put the odds for good health in your favor?