Knee Is Better With Frame Essentials®

"Last year I started experiencing severe stiffness and pain in my right knee. The pain seemed to have literally appeared out of nowhere. I exercise on a regular basis, four to six times a week and I had never experienced any pain like this before. My leg, around the knee, was swollen to probably twice its size in the front and back.

Anytime I sat down, I had to remember to keep my right leg straight so the pain and stiffness would not be as bad when I stood up to walk.

If I forgot to keep the leg straight, when I would stand to walk, I would have to stand still for about thirty seconds or so with all of the pressure on my left leg until my right leg 'loosened up' a bit. After I started walking, I would limp for approximately one minute until the pain and stiffness would seem to go away and my knee would feel fine.

Twice I went to my regular doctor regarding my knee. On the first visit, he told me to just take Motrin® for it and not to exercise as much until it felt better.

On the second visit, he wanted to write a prescription for Tylenol® 3 with codeine. I refused the prescription because, while it would treat the pain, it would not treat the problem. After performing a couple of simple tests on my knee, he finally referred me to the Sports Medicine Center for more detailed testing and observation.

I went to the Sports Medicine Center and the doctor there took a look at my knee. Because of the swelling, she wanted to do a couple of strength and mobility tests on my right leg. The tests were very painful and she decided to send me down the hall for a couple of x-rays. The x-rays showed that I had worn cartilage on the inside of both knees and osteoarthritis in both knees.

Because that did not explain why I was having so much pain and weakness in one knee and not the other, the doctor was concerned there was some type of a tear in my knee that couldn't be seen on the x-ray, so she gave me a prescription for an MRI.

I had the MRI done. Two weeks later, I went back to the Sports Medicine Center to discuss the results with the doctor. The MRI only showed the knee had fluid on it, but nothing else. I was given a prescription for physical therapy, three to four times a week for one month. With a copay of $30 per visit, that was not feasible for me to do.

The doctor told me to buy a specific type of glucosamine chondroitin and take them, following the instructions on the bottle exactly. I was also given a sheet that contained specific exercises to do on a daily basis, which would strengthen the muscles around the knee.

I called my mom who has been a Member of The AIM Companies for several years now. She told me to start taking Frame Essentials and to increase my intake of BarleyLife (which I had already been taking for a couple of years).

I continued riding the bike at the gym and walking on a regular basis. Within one month, my knee was feeling better and all of the swelling was gone.

Within two months I could barely feel any discomfort. By the third month, my knee was totally healed.

Because of the severity of the pain in my right knee, I was really concerned, but taking the Frame Essentials and BarleyLife, along with my continued regular exercise made a world of difference!" - Erika Morgan, Ferndale, Michigan 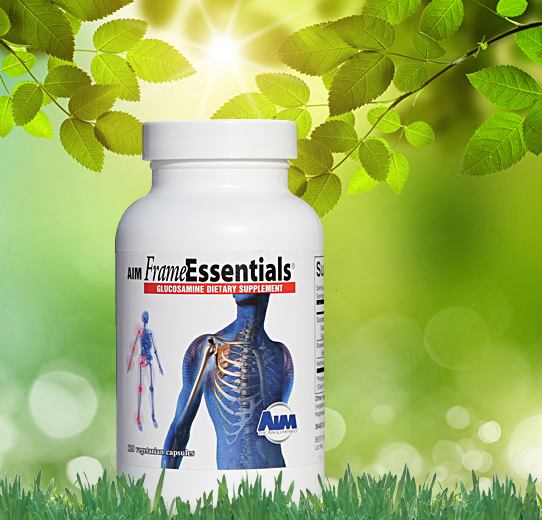 Testimonials should not be construed as representing results everybody can achieve. Frame Essentials® is not intended to diagnose, treat, cure, or prevent any disease. Results may vary per person.