Have you noticed how mainstream doctors (the majority who know little about nutrition) are quick to attribute the beneficial effects of natural remedies to the "placebo effect"?

What they're saying is, it's all in your mind.

The following story is an example of this nonsense. I'm sure you know someone who has had a similar experience as one of my patients, Evelyn.

Natural remedies not only work, but can be used to prevent the problem, which is what you and I both want.


Barley Juice: Nature's Recipe
For Helping Your Body Cure Itself

Evelyn S. was in my office a few weeks ago for treatment of a relatively mild diabetes.

However, ten years before her diabetes was diagnosed, Evelyn suffered with debilitating arthritis, associated with patches of psoriasis on the skin.

Psoriatic arthritis is a first cousin of rheumatoid arthritis and is characterized by inflammation, pain and deformity of the joints.

Even with the aid of powerful drugs, Evelyn could hardly walk or twist off a loose-fitting bottle lid. She had tried Cytotec, Voltaren, Plaquenil, Darvocet, Atarax, Motrin, Lidex, Medrol (a steroid) and Flexeril.

These drugs have side effects comparable to a mugging.

Evelyn also had seen a highly respected specialist in rheumatology. He confirmed her diagnosis and like so many other specialists, he prescribed the newest, strongest and most dangerous drugs.

Then in September of last year, Evelyn took the advice of a friend and began drinking the juice of young barley plants. One month later, she was pain-free and drug-free. Her patches of psoriasis had all but disappeared.

I examined Evelyn, her doctor’s records and the specialist’s report. I also looked at the recommendations and the list of drugs she had taken up to September 1991.

I wanted to know more about this barley juice and how it might possibly benefit my patients and newsletter readers.


"Let Your Food Be Your Medicine"

Evelyn's physician was also surprised at her rapid recovery, but doubted the barley juice had anything to do with it. He attributed it to the placebo effect. He concluded Evelyn's hope that the barley juice would work - rather than the juice itself - actually improved her condition.

But what about all those other high-tech drugs that were supposed to work, but had failed? Why didn't they also produce a placebo effect?

If one of them had worked only half as well as the barley juice, would the doctor have said, "Oh that drug, it's just a placebo"?

To help convince her doctor the barley juice did work, Evelyn suggested he give it to his worst arthritis patient, who happened to be Mr. A.V.

This fifty year-old man had such a severe case of rheumatoid arthritis, his visibly deformed joints hurt all the time. The doctor told Evelyn if barley juice helped this particular patient, he would jump through the roof.

In six weeks, Mr. A.V. was pain-free and drug-free. According to his wife, he was also less depressed.

The doctor was asked if he had now "jumped through the roof" and he laughingly replied, "Not yet," although he could not explain the quick turnarounds of Evelyn and Mr. A.V.

As for Evelyn’s high respected rheumatoid arthritis specialist? He still doesn't know his recommendations did not help, while a natural food did.

But it wouldn’t matter anyway, as nutrition is not his field. Besides, he's too busy giving lectures about a new drug that might relieve pain, while burning a hole in the stomach.

It is the simple that confounds the wise. Long before there were rheumatoid specialists, Hippocrates, the father of modern medicine, advised, "Let your food be your medicine."

Evelyn used a product named BarleyLife®, a powdered extract of young barley grass, which was developed by Japanese researchers.

Through personal experience and research, they came to believe that if synthetic drugs make you sick, then they cannot also make you well.

Ancient Chinese medicine and its father, Shin Huange-ti, had the same conclusion as Hippocrates. "It is the diet, which maintains true health and becomes the best drug."

The Japanese researchers were also aware of something else: Healthy, green plants are the "most marvelous expression of vitality on the planet." They set out to harness that vitality with the juice from green plants.

The researchers from Japan realized if the public was going to accept this green juice, it had to taste good and be convenient.

It also had to be processed without heat, to preserve the nutrients and enzymes that gives the green juice its power.

To date, thousands of letters have been received from grateful people who have been helped - in some cases even cured - of asthma, eczema and other skin conditions, arthritis, constipation, inflamed and swollen stomach, diabetes, high blood pressure, heart disease, hepatitis, cancer and more.

In commenting on the number of conditions treatable with green barley juice, one researcher noted:

"Obviously, a substance which is as effective against obesity and eczema as it is against heart disease and cancer, is either a ‘miracle drug’ beyond belief, or no drug at all, but rather, something which fosters the one true healing miracle - the body's ability to cure itself."

There is plenty of explanation for the curative effects of green barley juice: The green drink is loaded with vitamins, proteins, minerals, enzymes, chlorophyll and other important nutrients.

Chlorophyll is similar to the hemoglobin in your red blood cells that carry oxygen. The difference is chlorophyll contains magnesium, while hemoglobin contains iron.

Chlorophyll is a widely used deodorizer and breath freshener, in part because it is a germicide.

One of the Japanese researchers gave barley juice to an acquaintance with abdominal gastritis so severe, she needed analgesic injections for pain relief. The pain went away after her first drink of barley juice.

The Japanese researcher wrote: "To those who devote themselves to the study of medicine for disease, nothing is more impressive than seeing the pain of the patient relieved before their eyes."

Green barley juice also has an abundant supply of enzymes.

Enzymes are complexes of proteins, vitamins and minerals that do the work of the body. Without enzymes, you would be no more than a bag of bones, unable to walk, talk, blink or breathe.

Enzymes are destroyed by even low levels of heat.

In 1979, at the general meeting of the Japanese Society of Pharmaceutical Science, it was reported that more then twenty enzymes had been isolated from green barley juice. It is these enzymes that make barley juice a "live food."

Two enzymes are of particular interest to me.

Cytochrome oxidase is one of the enzymes essential for cell metabolism.

In your body there are two forms of fat. One is brown fat, which contains cyochrome oxidase and is metabolically active. The other is white fat, which lies around being ugly.

Many claim that regular supplementation with green barley juice stimulates weight loss, which is likely due to the enhancement of the cytochrome oxidase enzymes.


An Enzyme With A Curative Effect

Normal metabolic activity throws off dangerous superoxide free radicals (cause aging and tissue damage), which are oxygen molecules with an unpaired electron.

Superoxide free radicals damage the cell walls and are thought to be a primary culprit in aging and many diseases, including cancer.

Antioxidants like SOD protect the body from the toxic free radicals. In mice inoculated with cancer, barley juice had a surprising curative effect, thought to stem from the large quantity of SOD in the green juice.

I personally have been using BarleyLife®. Though I have no afflictions, I have noticed the following benefits:

In the morning, I used to drink a single, large cup of coffee. It was a habit, a ritual, a virtual necessity.

However, I have found drinking BarleyLife® on an empty stomach has almost an identical "wake up" effect and is obviously healthier than drinking coffee.

I frequently ride a bicycle to and from my office for exercise. I had noted for several months that looking over my left shoulder caused a slight ache in the upper part of my back.

This was more of a bother than a concern and was not enough even for a visit to my friendly chiropractor for some back snaps.

Yet, after a week or so of regular use of the green barley juice, this positional ache was gone.

Folks, I do not take this lightly.

Take one to two teaspoons of the green powder in water or juice, two to three times daily. Its health benefits are too widely spread to be used only when you have some specific disease.

Question: Wouldn’t eating raw, green vegetables be just as good, even better, than the green barley juice? There may be an advantage to the concentration properties of the green juice product. It is thirty times more concentrated than the barley itself - and that’s a lot of green.

Question: Is There Anyone Who Should Not Use BarleyLife®?BarleyLife® is a whole-food concentrate, so most people should be able to take it. Those with severe medical problems or complications should consult a health care practitioner. Those on a restricted diet (especially in regard to “green foods”) should also consult a health care practitioner.

Question: I Started Taking BarleyLife® and I Feel Worse. Why? When you make a change in your diet, your body often goes through a cleansing known as detoxification. This can manifest itself in fatigue, rashes, and headaches. It is your body flushing out toxins.

P.S. BarleyLife® is for people who believe nutrition matters. They believe our busy lives, chronic stress, lack of exercise, depleted soil and polluted environments require more nutrition than we get from the food we eat.

Dr. Julian Whitaker is the founder and director of the Whitaker Wellness Institute, where for more than thirty years he has more than 45,000 patients - many with serious, chronic illnesses - who have been failed by conventional medicine. 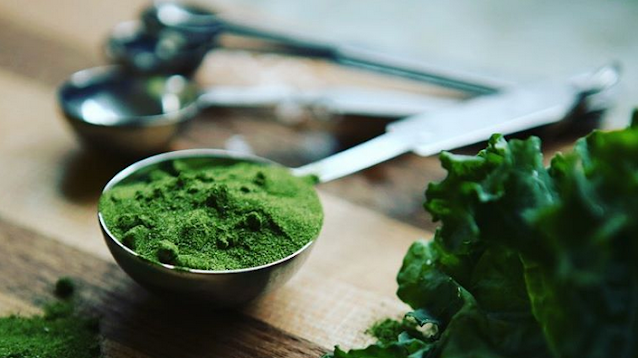