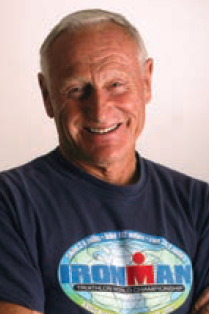 Lew Hollander once said in an interview with Bleacher Report that "a lot of my contemporaries, a lot of people my age, are either barely getting around or dead."

But Lew doesn't have any trouble getting around and he certainly is not dead.

In fact, at the age of eighty-four, Lew Hollander completed the Ironman 70.3 Boise on June 7, 2014, a half-Ironman competition held every year in Boise, Idaho. This half-Ironman triathlon is composed of a 1.2-mile swim, a fifty-six mile bike race and a 13.1-mile run. Those numbers are doubled for regular Ironman triathlons, which Lew has been competing in since the tender young age of fifty-five.

People ask Lew if there's a pill or a drug that extends his life and allows him to finish grueling triathlon after grueling triathlon. He instead cites intense exercise as the key to his long life. He trains day after day, pushing himself until he can hardly breathe.

"Use it or lose it," he said in an interview on KBOI News. "It depends on what you did when you’re forty, how you’re going to be when you’re eighty.”

He specifically credits anaerobic exercise for his longevity and strength.

"You can get your whole system to work. You can get the blood to go to your brain and all those kind of things. Little tiny blood vessels need to get pumped."

Do you know what else pumps up those blood vessels? Beet juice.

That's probably why Lew Hollander drinks Red Rush™. He was introduced to it at the Pole Pedal Paddle event in Bend, Oregon and loved everything about it. He even wore a Red Rush™ shirt when they interviewed him on the local news.

Lew is not only an athlete, but also a physicist. He is a man of body and science, who understands how vegetable nitrates are converted via natural functions into performance-enhancing nitric oxide.

By drinking Red Rush™, he can potentially break through performance plateaus and increase the quality of his daily anaerobic exercises and by his own logic, possibly his lifespan.

Good luck to Lew Hollander in Hawaii this October. So far, he has finished twenty-three Hawaii Ironman races. "I figure if I didn’t have an entry into a race, I wouldn't get out of bed in the morning."

P.S. Red Rush™ is not an energy drink and contains no artificial stimulants like caffeine or ephedra. Consequently, you will not crash. Red Rush™ boosts circulation, with the extra oxygen providing more endurance naturally over time.

Click Here to find out more about the benefits of this performance shot.