A Natural Way to Protect Your Prostate 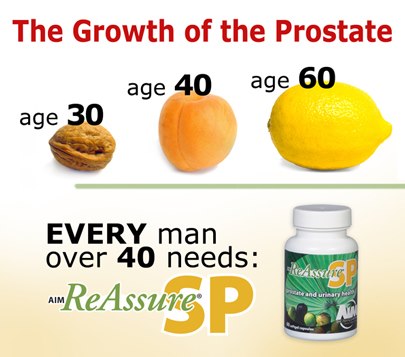 You can naturally, safely, and effectively overcome the symptoms of an enlarged prostate.

Natural options exist for combating the symptoms of benign prostatic hyperplasia, commonly referred to as an enlarged prostate.

These symptoms may include frequent urination, weak flow, and difficulty urinating.

Some estimates say fifty percent of all men will have these benign prostatic hyperplasia symptoms by age fifty. The percentage rises to eighty percent by age sixty.

Though the likelihood of having benign prostatic hyperplasia symptoms is high, control remains in your hands. Diet, exercise, and natural supplements can relieve symptoms.

In some cases, they can do so as effectively as prescription drugs.

The most popular and widely used natural treatment for prostate health is saw palmetto.

The extract of this plant suppresses the conversion of testosterone to dihydrotestosterone (DHT), an overproduction of which has been linked to enlargement of the prostate.

The Journal of the American Medical Association reported 320 milligrams of saw palmetto can reduce urinary symptoms as effectively as prescription drugs.

Saw palmetto has been the subject of a number of other studies as well, many pointing to its effect as a safe alternative for managing benign prostatic hyperplasia symptoms.

Another way to take action against an enlarged prostate is to consume a diet that promotes prostate health. Eat more fruits, vegetables, legumes, as well as fish.

In addition, foods that are high in zinc, like pumpkin seeds, may be beneficial, as it is believed zinc is required for the prostate to function properly.

Foods rich in lycopene, such as cooked tomatoes, may have prostate benefits, too, as studies suggest lycopene lowers the risk of prostate cancer.

When you find yourself facing down the effects of an enlarged prostate, take heart that natural, effective remedies exist.


What People Are Saying

“My better half relies on ReAssure SP for more than just the ability to urinate better. It has given him a new lease on life.

He started taking ReAssure SP along with the Garden Trio over a year ago, when he was diagnosed with prostate cancer.

He was having trouble urinating, so he went to the doctor, who told my husband he needed to take a saw palmetto supplement alongside cancer treatment, due to his high cancer numbers.

My husband asked me if there were any natural products that he could take because he didn’t want chemotherapy or radiation.

I had good news for him: ReAssure SP.

He now relies on this product more than any of the others, because it has helped him with his urination problems, and he gets a more restful sleep. He used to get up ten or twelve times a night, but after only a few weeks using the product, he only had to get up once or twice, if that.

His cancer numbers are down because he’s been sleeping better. He also changed his diet to include less red meat.

He has changed a lot of things in his life, but one thing he has kept the same for almost two years is the ReAssure SP. He makes sure that he does not run out.

Thank you so much, AIM, for the relief you have given him.” - Cathlene Ann Blanton, Ontario, Oregon

Testimonials should not be construed as representing results everybody can achieve. ReAssure® SP has not been evaluated by the U.S. Food and Drug Administration and is not intended to diagnose, treat, cure or prevent any disease or illness. Results may vary per person. 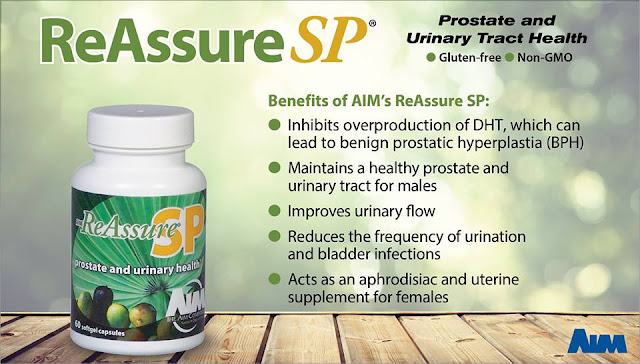