Vitamin B-12 and Academic Performance

A Deficiency of Vitamin B-12 Linked to Poor Academic Performance

In general, B vitamins play a significant role in cognitive functioning as well as metabolism.

A study published in the Journal of Nutrition found a lack of vitamin B-12 is linked to poor academic performance.

Students who were deficient in this vitamin nearly tripled their chances of repeating a grade and were almost twice as likely to miss school.

The study also looked at other micronutrient deficiencies, but vitamin B-12 was the only one connected to being held back a year.

"Vitamin B12 is necessary for adequate brain development,” said Dr. Eduardo Villamor, associate professor of epidemiology. “Deficiency very early in life or in old age has been linked to cognitive and behavioral problems, but it was not known whether it could be related to academic difficulties during school age. Grade repetition and school absenteeism are important outcomes because they predict school dropout and impair children’s options for educational advancement and development." - Medical Xpress

Peak Endurance® contains fifty percent of your daily need for vitamin B-12.

Note: Peak Endurance® is not recommended for kids under eight.

P.S. In addition to the B vitamins, Peak Endurance® accounts for seventy-two percent of the Recommended Daily Intake (RDI) of vitamin C per serving.

This nutritious powder also contains coconut water, which is considered to be the best natural electrolytes. It contributes to the proper balance of all six major electrolytes (sodium, potassium, calcium, phosphorous, magnesium and chloride).

Peak Endurance® Key Benefits and Features
Peak Endurance® helps to compensate for the decline of blood ATP levels, which can slow you down and decrease your levels of energy. 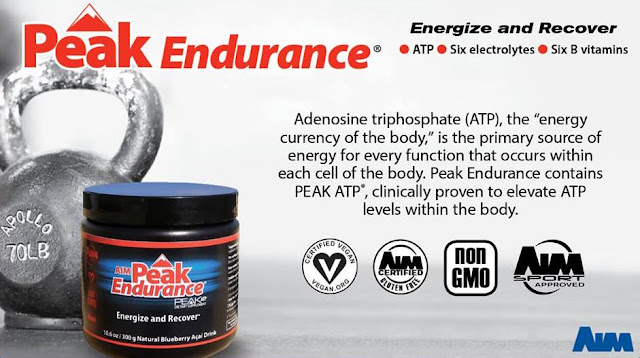