"I had been struggling to heal my hand for a year and a half and BarleyLife fixed it up in a month."


"Around March 2012, I started to develop a rash-like area on my right palm. It began with white bumps and the area would dry out so badly that my palm would split into a cut.

It would last for about a month and clear up for a week or two and then start all over again.

I knew doctors would call it eczema, give me a steroid cream and send me on my way, so I took the naturopathic route.

The naturopath, after testing, said that my skin problem was due to my liver being overloaded and not functioning at optimum levels. He explained the body's first line of defense and toxin elimination was the skin.

My skin was simply trying to get rid of the excess toxins.

He also explained that steroid creams created a layer on the skin through which the body could not expel toxins, and these attempts at expulsion would manifest into a more serious condition.

Unfortunately, every time I went to the naturopath, my skin problem would be somewhat dormant and he never saw the full extent of the illness. For seven months, I tried taking his prescribed remedies to no avail.

During that time, I did go to a medical facility and, as I suspected, they gave me a steroid cream, which I didn't use.

Almost a year and a half passed, and I was still attempting to get my skin problem under control, so I decided to give BarleyLife an honest try.

I had taken BarleyLife before off and on over the years, more so when I felt I was getting a cold or the flu. I started taking three teaspoons two to three times a day.

After a month, my hand completely cleared up.

I continued with my BarleyLife regimen for another month and my skin problem didn't return.

I dropped down to three teaspoons once a day, and my skin has been clear for the last six months. I had been struggling to heal my hand for a year and a half and BarleyLife fixed it up in a month.

I believe that the problem was indeed my liver and that BarleyLife helped cleanse my body, returning it to its optimum functionality.

I no longer take BarleyLife only when I feel sick. I am convinced of the dramatic effect BarleyLife has on the body and I continue to take it every day." - Candace Botticelli, Burnaby, British Columbia, Canada

P.S. BarleyLife® is for people who believe nutrition matters. A single teaspoon equals three servings of green vegetables and more.

Click Here to see more about this nutrient-dense green powder. 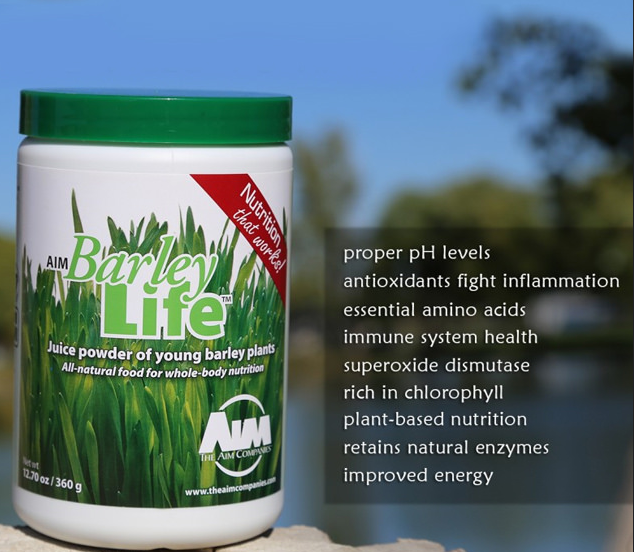 Note: This testimonial cannot be construed as representing results everybody can achieve. Nutritional supplements from The AIM Companies™ are not intended to diagnose, treat, cure, or prevent any disease. Results may vary per person.