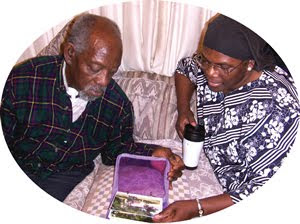 They told him he had only a few weeks to live. Time for the family to contact hospice and do the best they could under the circumstances.

The ravages of what was described as inoperable throat cancer plus the chemotherapy, radiation, and morphine had taken their toll - he couldn't eat, couldn't talk, could barely walk or see.

"I got to where I didn't even recognize all of my children," says R.E. "I was out of it every day."

For his family of nine children, grandfather to thirty-five, and great-grandfather to twenty, it was devastating news. He had been the center of their lives for as long as they could remember.

His daughter, Dr. Sennie Smith, a Member of The AIM Companies™, was one of the family members gathered in Danville, Illinois, deciding how best to deal with the last days of the life of their father. Let me take him to Houston, Texas, she requested of her brothers and sisters. She knew of an herbalist there who might help. She said she would give him AIM products. The son of Dr. Sennie Smith had recovered from a kidney transplant with assistance from natural herbs and supplements.

Against the advice of his doctors, the family flew R.E. to Houston for the natural treatment option. "We had nothing to lose," recalls daughter Jeanette Osler, a school teacher in Atlanta, Georgia. But, she admits, she thought she had seen him alive for the last time.

The challenge was daunting. In addition to everything else, R.E. says his "fingers had turned black and burned, my hands and feet were numb and they had swelling all the time, my skin was cracked and bleeding, doctors put a tracheotomy in my neck and it was so open it looked like I had been hung. I had burns on my neck, feet, and legs and my skin looked like black leather. I lost all sense of taste and smell. My mouth was constantly dry and I couldn't take water or food by mouth."

For several months, Sennie nursed her father. Slowly, he began to regain his health. She would e-mail her siblings with milestones - Dad sat up today, he took a drink of water on his own, he ate a solid meal, the tumor in his throat is smaller, his sores have healed. The crowning moment came with a visit to a Houston hospital for tests.

The cancer was gone.

The core products for the regimen of R.E. Goines include BarleyLife®, Just Carrots® and Bear Paw Garlic®.

"I took the AIM products religiously and I didn't try to substitute any other cheaper, look-alike products. My daughter, Sennie, insisted on me using only the best. People need to try to stay well. Put the right things in your body - the right food, the right supplements. Everything we need to stay well, God has provided in nature. We don't need a lot of chemicals and traditional medicine. Doctors are just practicing medicine; don't let them practice on you. You know your own body better than you think."

For his body, R.E. eats lots of fruits and vegetables, he drinks one hundred percent natural juices, and lots of water. He believes the sun and walking have wellness powers and he sleeps often because "I know my body needs rest in order to revive itself."

Products from The AIM Companies™, he believes, "helped save my life. I have only good to say about them. I am living proof that they work. Get on an AIM routine and stick to it. It is not always a quick fix, but you will see change and it gets better and better every day."

Now eighty-three, R.E. says when he was young, "I always wanted a bunch of kids. Well, I have a bunch and they are my life. Right now, they are my reason for wanting to keep on. My family has always been the biggest part of my life," adding, "I was at the brink of death and came back. If you are sick with anything, don't give up. Take care of the one body God gave you."

R.E. lost his wife, LeeAnnie, in 1998. They began life together in 1944 in Hollandale, Mississippi. He was a meat-cutter and left for the Army two days after they were married. He spent thirty months in the military, the majority of it in the Philippines. Following World War II, they moved to Champaign, Illinois, where the remarkable saga of the family begins.

Most of the time, R.E. worked two jobs to support his growing family, "whatever it took," he says. He was a mechanic, a cook, delivery man, janitor, painter, gardener and he and his wife managed a restaurant. Goines may like to sleep today because there were times when he did not get a lot back then. "Sometimes I didn't get none." Daughter Jeanette notes: "By any standard, we would have been considered extremely poor. But we never felt that way." Mom and Dad worked and did what they could for the kids.

Fridays, for example, were treat days for the Goines family. R.E. would bring home ice cream, watermelon, popcorn, or hotdogs for a cookout. Sometimes the family would be packed into the trusty station wagon and head to a local drive-in theater where they would drape blankets on the car and munch on homemade popcorn. "Our childhood was rich and cheap," says daughter Dorothy Goines, Urbana, Illinois.

R.E., whose formal education stopped in the eighth grade, instilled a strong work ethic and the value of education in his family. "I always pushed my kids to do well in school so they wouldn't have to depend on anybody else taking care of them. I raised them to buy, not rent, to own their own, so people couldn't control them." 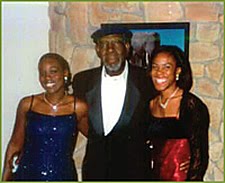 Four of his daughters have advanced degrees. One of them, Beulah, has a doctorate in education. She received it from the University of Illinois. Her parents participated in the ceremony and Beulah says she could not help but think that for years her father worked as a laborer at the university where she now was receiving her doctorate.

"I cried," remembers R.E. Then he emphasizes the value of education: "When you get it up here (pointing to his head), others can't take it from you."

R.E. would like to live to be one hundred and twenty, but he knows that decision is in the hands of God. He has depended on God and himself for most of his life.

"Study, watch, look, and listen. Learn as much as you can and always be able to do for yourself. Be willing to help others if you can." And, he adds, "Every day I live, I try to learn something, teach myself something, and do something worthwhile."

R.E. acknowledges he really is fortunate to be alive today.

"I know a lot of people don't beat cancer," he says. Jeanette says her father "has always been kind of a hero to all of us. Every day that he lives is just an extra blessing for us."

(Some of the information in this story was taken from an article in the News-Gazette, Champaign, Illinois.)

P.S. Do you believe nutrition matters? Do you want to do everything you can to avoid being sick when you get older? To find out more, Click Here.