For Susan Henriques of Punta Gorda, Florida, an introduction to AIM back in 1992 turned her health around, after being devastatingly ill for five years.

In the 1980s, Susan had been a very active woman, power walking forty to fifty miles weekly.

Then in the fall of 1987, she came down with what she thought was the flu. Feeling exhausted and with a fever and swollen lymph glands, Susan went to her doctor, but her situation only got worse.

"My muscles and joints began to hurt," Susan recollected. "I became more and more tired."

As the weeks went by, she found it difficult to think clearly or put sentences together. And she began to experience short-term memory loss.

Susan visited eleven doctors and three hospitals over a period of eighteen months, until finally being diagnosed with chronic fatigue syndrome.

Essentially, the life Susan had known came to a halt, especially affecting the relationships with her husband, daughter and son.

"I had long periods when I could not get out of bed," Susan stated. "This went on for a few years."

It forced her to all but ignore her family.

But nothing helped until she and her husband attended a marriage ministry class, where the leader recommended that Susan try barley grass powder from AIM.

After three months of taking one teaspoon a day, Susan felt some strength in her legs. And the results of her blood work were much improved.

Seven months later, the pain began to go away, allowing her to skip the next doctor's appointment and instead go on a vacation with her husband.

Jumping ahead many years to early 2018, Susan contacted AIM to say how happy she was that BarleyLife® has been certified gluten-free, because she had been diagnosed with celiac disease in 2010.

"I have taken as much as six tablespoons in a day and had no reaction." 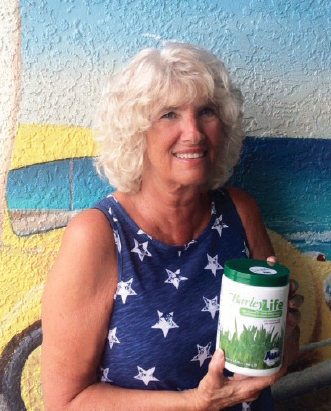